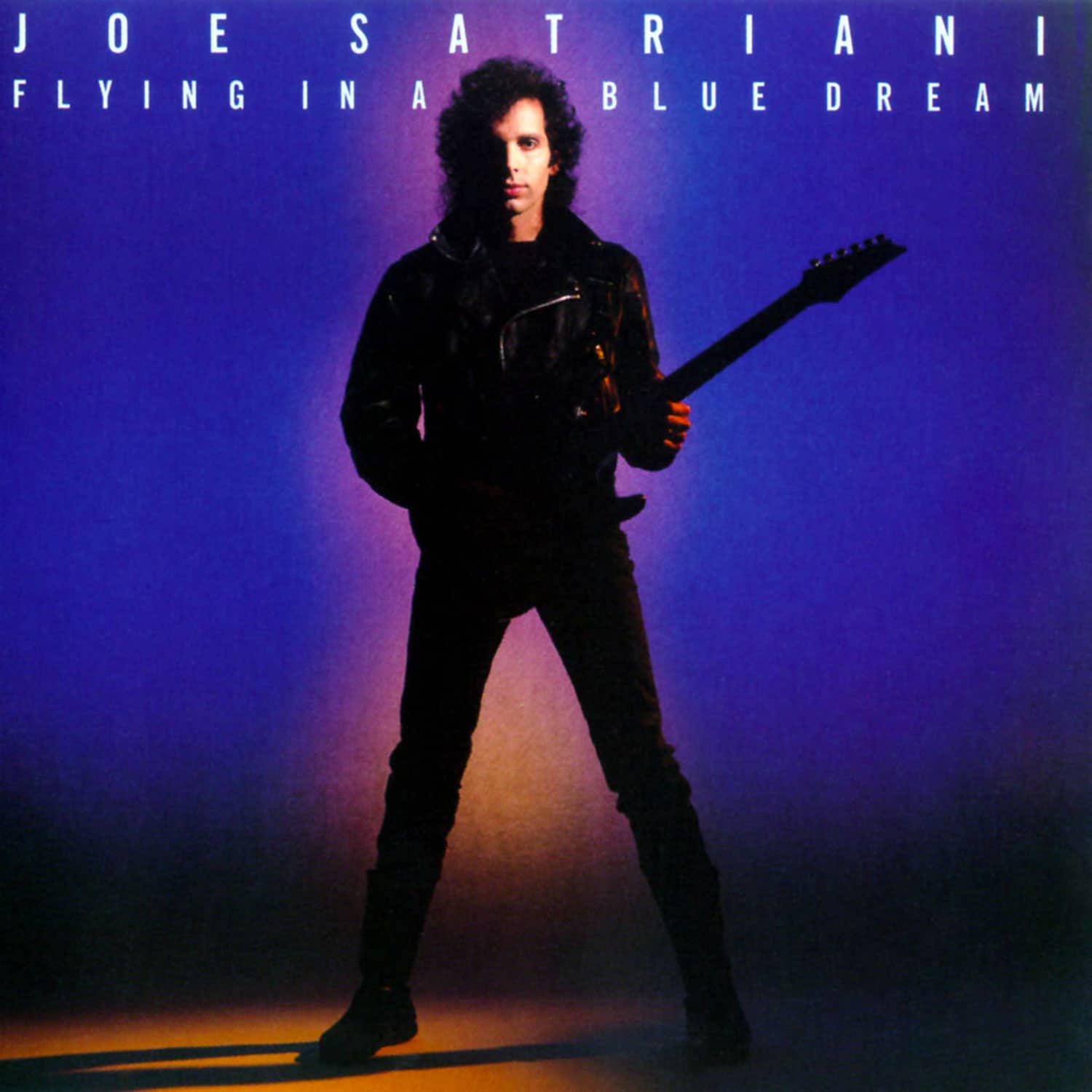 Flying In A Blue Dream

For the people that only known Joe Satriani by his reputation, the best way to discover his universe is to buy Flying In A Blue Dream. This third studio album is less experimental than his predecessor Surfing With The Alien, less technic-driven but have a larger variety in the styles, Joe refuses to repeat himself. Flying In A Blue Dream has reached Top 40 Billboard’s Mainstream Rock chart.

The most important specificity about this album is that Joe is singing for the first time, on 6 songs. Even if he’s not such a good singer that the great guitar player he is (it’s kinda difficult!) his songs are an added value on the album, thanks to the nice lyrics. We may retain the humorous « The Phone Call » with some Rockabilly accents, the breathless « Can’t Slow Down », the funky « Strange » and above all the melancholic « I Believe » that is a tribute to Joe’s father who just passed away.
Jeff Campitelli confirms his talent on studio performance on the whole album except for « I Believe » where Simon Phillips (Toto, Andy Timmons) made an appearance behind the toms. Stu Hamm plays for the first time with Joe Satriani on an album even it’s just for 2 songs. Stu Hamm and Jeff Campitelli has been the musicians that have play the most with Joe in his career, for the good reasons indeed.
On the instrumental side, Joe has never been better, he have a step on many styles and comes with very atypical songs, some jewels of his repertory like « The Mystical Potato Head Groove Thing » and its left-hand tapping, the fantasy « Back To Shalla-Bal » that was composed in order to be a second « Surfing With The Alien » (Shalla-Bal is a character in the Silver Surfer universe), the western « The Feeling » played on banjo-guitar, the ZZ Top style boogie « Ride » and the crazy all-tapping song « Day At The Beach ».

« I decided to delve into the two-handed, arpeggiated, odd-time signature way of representing the complicated nature of life. And the second part was really about the way we relate to it as humans. The way that the heart looks at things is a very different way than the mind looks at things. » – Joe, about The Forgotten.

It’s hard to release an album as diverse as that, the immagination and the talent of Joe are at their peak, on the 18 songs of this album nothing can be dropped on a single second. The master took some time to prepare that because six months have been necessary to record this anthology album. The result? An incredible amount of the most beautiful songs from Satch. When you close your eyes and listen at « Flying In A Blue Dream » you’re back to childhood and have some dream somewhere over the clouds, « The Forgotten Part. 2 » gives you the thrills because of the level of feeling and virtuosity Joe has reached, « Big Bad Moon » and his deeply rock solos drives you in a special universe Joe have just created, and what can we tell about « Into The Light », two minutes of a well-named song where you feels like you’ve reached the sun himself, then this song fades out and you’re just here enjoying the moment, the album is over and you realise that it might be one of the best album you’ve ever heard.

A few words of John Cuniberti, the main engineer and producer of the album :
“The voices at the beginning were accidentally recorded on tape through a guitar pickup when Joe was preparing for the start of the song « Flying In A Blue Dream ». The studio we were working in had serious RF (radio frequency) invading the building from a nearby transmission tower (Sutro Tower). My theory is, it’s a Art Linkletter show called ‘Kids’ where Art interviews children. You can hear the audience reaction in the background. The kid is asked something about his parents or girls and he responds « Sometimes they do and sometimes they don’t ». During the overdubs we kept hearing it at the beginning of the song and became fond of it. When I mixed it I left it in because by them Joe and I could’t imagine it not being there.”

The Flying In A Blue Dream album is not only a confirmation of the brio he has demonstrated on Surfing With The Alien, but also a real progression, a step further toward reaching musical peaks no one else has even been in.