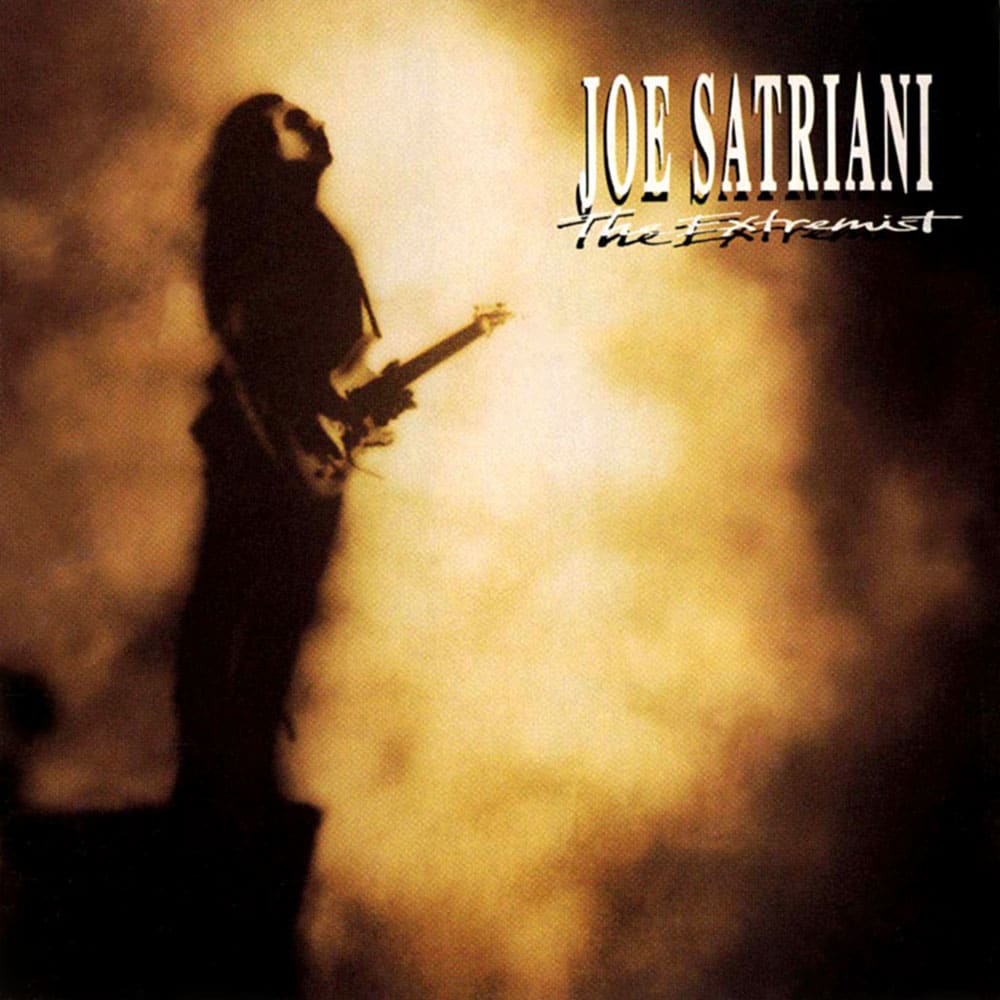 All songs written and arranged by
Joe Satriani

Produced and mixed by
Andy Johns and Joe Satriani

Joe have blown our minds with the very innovative Not Of This Earth in 1986, have conquered the entire world with the platinium album Surfing With The Alien in 1987, proving that the guitar have a place on center stage, and he has surprised everyone by trying new sounds and by singing on Flying In A Blue Dream in 1989. Now, 3 years later, he comes with a new anthology album: The Extremist.

Joe Satriani pleases the auditor the right way, playing a more basic Rock that moves away from that alien side on which he has surfed before, our guitar player is flattering american radios and establish his leadership reputation.

The opening song « Friends » is nice and userfriendly, a taste of how we’ll feel like at the end of the CD. Then « The Extremist » alternates harmonica, heavy rhythm parts with brave and wild solos, « War » goes deeper by etablishing a very dark ambiance, more pronounced and very well illustrated.

Then comes the anthology ballad « Cryin’ », full of feeling and guitar virtuosity despite its very slow tempo, Steve Vai even said about this song that it was perfect (!). The arpeggios in « Tears In The Rain » are also full of a particular emotional speech that only belongs to Joe (and he will reiterates a few years later on Time Machine with the song « Baroque »). Still about the ballad songs, « Rubina’s Blue Sky Happiness » is an anthem for joice, dotted with some irish accents in the form and a distant electric guitar, underlining the acoustic choice.
« Summer Song » and « Motorcyle Driver » are very powerful Rock songs based on classic chords and powerchords, but that doesn’t stop Joe for making epic solos on them, on the contrary this disconcerting simplicity in the choice of the chords supports the lead guitar and makes space for expression.
About « Summer Song », this song was used in a famous commercial for the Walkman, and was also included a bit later on the soundtrack of Formula 1 (1996, Playstation) and Gran Turismo 4 (2004, Playstation 2), all that under Sony license.

Joe did here an album that stands out like one of this most successful albums, closing a period and starting an other in the huge ocean of his career. The next album he did next has been more than an exploration of Rock, but above all a time exploration…