Hey guys, it’s Saturax and welcome to this exclusive Joe Satriani interview, made on 15th July 2016 in Saint-Julien-en-Genevois for his 60th birthday!

Joe was invited by the guitar festival Guitare-En-Scène to celebrate his 60th anniversary on stage. A lot of surprises were programmed by the festival, including a Steve Vai appearance for the encore, a giant cake, birthday messages from famous bands, etc. Joe Satriani Universe was partners of the event, and for the occasion we made an interview-domumentary of this day.

You can activate the subtitles in the YouTube video player (english and french).

Saturax : Today is your sixteth birthday. Why have you chosen to be here in Guitare-en-Scène?

“We’re very lucky and fortunate to get invited back to this festival. It’s a great festival and this year’s lineup is absolutely amazing, great guitar players. And I thought it was quite fitting to stick around a little bit longer on the tour so I could celebrate a birthday on stage, which I think is a really great way to celebrate the birthday, so we’re very happy to be here.”

“It’s Joe Satriani’s birthday which is fantastic, and he’s such a great guy, such an amazing player ; and if you see this Joe, happy birthday even though it’s over now by the time you see this, or watch it on your next birthday. Happy birthday 2017 Joe Satriani! [laughs] Thank you for everything, so much fun being in your band, you’re such an inspiring guy and it’s so enjoyable playing with you, hanging out with you, traveling with you, doing all the stuff, it’s great. Love you man, happy birthday.”

Saturax : The Surfing to Shockwave tour sums up a 30 years long career, how do you explain this success?

“I can’t explain it. [laughs] I can only say that I’ve enjoyed it, a musical career is crazy, it’s a crazy endeavor, it’s got so many ups and downs and strange twists and turns, but if you really love music it’s easy to keep going. So I’ve always been in love with music and I’ve always fully engaged in the idea of being a musician, the best musician I could be, and that sort of sustains me. It still helps me every day, it just connect with the audience and connect with the creativity that I feel inside. But I can’t explain it! [laughs] I don’t really know how to say why it worked.”

Saturax : You often come in France since the late 80’s, what do you enjoy the most in the country?

“Well I think, my perspective really is first and foremost for doing the show. So, the audience has just been a wonderful audience from the very first show that we ever did in Paris in 1988. I just fell in love with the interaction we always seem to have with the French audience, no matter where we play in France, and we’ve played all over now.

Gérard (Drouot, ed) our promoter, is the only promoter I’ve ever had here in France and he’s shown to us every corner of the country and we’ve always had a great show. Along the way of course, I learned more about the people outside the show, and the crew that we’ve worked with they are fantastic. All the music and the art, great food and wine, everything I mean. It’s a wonderful place and we always enjoy coming back.”

Saturax : It seems that Chickenfoot is back on the table, what’s happening with that?

“Well, the only thing that’s really happening is that we have one song that was completed, we did two shows a little while back, a bit in a place called Lake Tahoe in California. They were really crazy, they went really well, we had a lot of fun, but Chad Smith immediately went out on tour with the Chili Peppers so he’ll be doing that.

But I think, over the next two years or so, when the Chili Peppers are out touring, there will be plenty of opportunities for the band to reunite during everybody’s downtime or vacation time. So it looks more promising than it has in the last couple of years. There may not be like a serious tour, but I think there might be more opportunities to record another song or two.”

“Hi, this is Bryan Beller, I’m here and I’m just at the – guys, what is this thing called ? [Guitare-en-Scène] Guitar on son? Scene? [En Scène] En Scène! My french is terrible, I’m so sorry. But I’m here just played a Joe Satriani concert, and it was Joe’s sixtieth birthday tonight and we had a very very special surprise for him! Steve Vai came out for the encore, and Steve Vai played Big Bad Moon and Surfing with the Alien, two songs that Steve has never before in his life played. And, so, people don’t know that we actually had a secret rehearsal back in Munich a few days ago at one of the G3 shows. It was just Steve, Marco and I, we got together and we jammed the songs. Just hilarious, it was kind of like watching Steve playing for, you know, like going dundundundundun – when was the last time we saw Steve playing rhythm guitar like that, right? Anyway, we had a really good time, it was a very special show, it was the last show over the European festival tour, and what better place to end it than here, yeah? It was great!”

Saturax : After Shockwave Supernova, what do you see for your next solo album?

“I don’t know! [laughs] I have no idea, I purposely didn’t want to make up my mind about a new direction for quite a while. Sometimes you can kind of rebound when you finish a record by just wanting to do something totally different. But Shockwave Supernova is a big record, it’s long, it’s got a lot of songs on it and I think it takes time, not only for the audience but for me to really digest what it is that I just put out there.

The tour is the best way to do that, to play the songs night after night, all around the world and you learn more about the direction that you’ve just completed, in a way. And so I like to pull off any kind of ideas about new directions for the next album until the last possible moment, so that it stays current and it’s fresh in the world, as it is in my mind, in my heart. So, yeah, I don’t know yet.” [laughs]

“Hey dad, you’re the best! Everything I know and I’ve learned is from you, you’re the best father and the coolest musician, and you’ve had such a cool career, and you rock a bald head like no other, and I fucking love you.”

Saturax : Is there a DVD on its way for the Shockwave tour?

“Not yet! You know, I keep thinking that there might be but we haven’t really received an offer that makes sense anymore to us. I’m looking to get an offer where we can record several nights instead of just one, which has always been a bit of a problem for us, all the DVDs have been made on this sort of stressful situation, in a venue that’s too small, it’s not good for the cameras, but we only have one night and we just have to… you know. Things go wrong they just become part of the show.

So I keep thinking “wow, in the old days people used to record a week of shows they picked the best, and it made more sense”, so I’m waiting for something like that. I’m sort of betting that it’s going to happen so I asked my son ZZ to come out and do some documentary, filming for us. He’s a young filmmaker and he has a very unusual style, so he has been capturing us every day on this tour, and I hope to get small footage that eventually would be part of that DVD package.”

“My wife Pia, who is so much smarter than me, one time described Joe. And she said “Joe is like the Grand Canyon. He’s big, he’s solid, he’s breathtakingly colorful, and he is for ever”. And there’s so many things that we can do in life, but finding your creative potential, and bringing it into the world to lift up people? You, my friend, are outstanding and we are grateful.”

Many thanks to Joe Satriani and his manager Mick Bridgen for receiving us so well once again. Many thanks as well to Bryan Beller and Marco Minnemann, it’s always a pleasure to see you around, to Mike Keneally, ZZ Satriani and Mike Manning for playing the interview game for the first time with us.

Interview shot in Saint-Julien-en-Genevois (FR) on July 15th 2016. Realized by Saturax and Brad Coudray on the camera and behind.

Huge thanks to our partner the festival Guitare-en-Scène, and especially Dempsey Morel from their team. Programmation and organisation has been amazing from the beginning to the end. www.guitare-en-scene.com

Special thanks to César Angelini for helping on the interview post-production.

PICTURES OF THE 60th ANNIVERSARY

Saturax
My name is Robin Angelini, aka Saturax. I’m a guitar player, teacher, arranger and composer from France. Today I live in Paris, I teach guitar everywhere in France and on Skype.
Recent Posts
Follow us 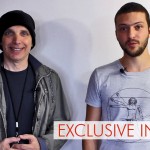 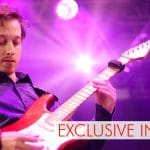