In a recent interview given to MusicRadar, Joe Satriani talks about his new 2015 album that could be entitled Shockwave Supernova. Joe Satriani has been performing in the famous Skywalker Sound studio, located some place across the Golden Gate from San Francisco with Mike Keneally on keyboards, Bryan Beller on bass guitar and Marco Minnemann on drums, and also in 25th Street Recording in Oakland.

The album will be released in July 2015.

The album will be a conceptual research where Joe Satriani gets in Shockwave Supernova ‘s skin, an alter ego he has developed.

“I never really made a concept album before, or maybe it’s something that I’ve done to some extent but never talked about. Crystal Planet had an internal concept that didn’t really need to be discussed to the audience. In this particular case, I had an internal dramatization on stage in Singapore, the last show of the Unstoppable Momentum tour, and I was telling myself, ‘You’ve got to stop playing with your teeth. Every night you’re just scraping the enamel off.’ And it’s true! In the last two years, I must’ve played with my teeth more than I’ve done in my entire life.”

Joe Satriani finds his inspiration on the new album in his relationship with Shockwave Supernova.

“I had a funny thought that I use this alter ego to kind of push me out there and be a showman, because that’s not really how I am, I’m usually more the shy, retiring type. Then I had this daydream that Shockwave has come to the end of the road, and the artist that dreamt him up has to retire him. But then he realizes that he really has to turn him into something else, something better. The songs that I’ve been writing over the past two years sort of address that transformation, what this guy Shockwave is thinking. It’s a crazy, funny concept.”

As he told us in our summer interview 2014, the line-up has been a real push to develop his new album.

“There’s a lot of playing that advances things both technically and melodically. From a guitarist’s point of view, it’s fun to hear new ground being broken. The melodies are really strong, and the arrangements push them into really cool and unexpected places. What I wanted to bring in was the high-energy performance level of Marco and Bryan along with the unpredictable musicianship of Mike Keneally. It’s a really exciting dynamic.”

Since the Unstoppable Momentum tour 2013 & 2014, Joe Satriani, Mike Keneally, Bryan Beller and Marco Minnemann developed an incredible band osmosis, and using all the creative ideas they have  together is very new compared to the great majority of the albums he’s recorded before.

“We don’t have to discuss a lot, so that makes things fun and easy, these guys bring in a totally different attitude from other people I’ve worked with. I sent them demos 10 days before we went in the studio, I didn’t want them to get too locked into anything and they’ve been sort of reinterpreting things in the studio, which is what I want. I ask them for different variations on how they think they might want to play something. Most of the time, that new path is what we end of going with.”

The Shockwave Tour is already planned in the UK in November, and will expand all over the world !

2015 is also coming with the second edition of the G4 Experience, starring Joe Satriani, Guthrie Govan, Mike Keneally, Tosin Abasi from Animals As Leaders, and guests like the rest of The Aristocrats, Stu Hamm and many others incredible musicians for an unforgettable and passionate 4-days camp.

Saturax
My name is Robin Angelini, aka Saturax. I’m a guitar player, teacher, arranger and composer from France. Today I live in Paris, I teach guitar everywhere in France and on Skype.
Recent Posts
Follow us 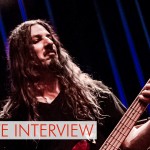