Hi Satch fans, after many years keeping up the mystery, the new G3 2016 is now officially announced!

For the first time since 1996, the G3 is not starring 3 guitar players but 2 guitar players and a band. It speaks volumes about the ties between Joe Satriani, Steve Vai, Guthrie Govan, Bryan Beller and Marco Minnemann.

The Aristocrats – Guthrie, Bryan and Marco – have obviously been together since 2011, they released 3 studio album, a live DVD and performed a lot of shows over the world. In the meantime, Marco and Bryan joined Joe Satriani after the release of Unstoppable Momentum, they did all the tourings together since then and worked on their first studio album Shockwave Supernova, along with the tours, and the upcoming Surfing to Shockwave tour in the US.

The second G4 Experience camp in California was starring Joe and Guthrie, and Marco and Bryan also were instructors for bass players and drummers, both will also feature on the new G4 camp in August 2016. Still about camps, Steve and Guthrie were together starring the Vai Academy 2014 -the equivalent of the G4 Experience headed by Steve – and had a great time jamming and teaching the students.

In addition Marco and Guthrie did a record and a tour with Steven Wilson, Bryan Beller worked about a decade ago with Steve Vai, we can see him on the Visual Sound Theories DVD, hair missing tho. And no need to talk about the wonderful relationship bewteen Joe Satriani and Steve Vai, at first they were master and students back in the 80’s, they became the most famous instrumental guitar players and Steve ran the majority of G3 along with Joe.

The ties between the 5 guys are very tight, that can logically explain why the whole band of The Aristocrats is featuring on the G3 2016, all the guys are musically connected, seems to be in a great friendship so we can expect an exceptional quality music to come.

“We are all extremely excited and absolutely honored to be sharing the bill with Joe Satriani and Steve Vai for this run of G3 shows. We have a tremendous amount of respect for Joe and Steve as groundbreaking artists in the world of instrumental rock who continue to bring it year after year. It will be a special privilege to bring our subversive brew of Aristocratic musical mayhem to the G3 stage – and especially the G3 audience. Let the games begin!”

Here’s the new poster of the G3. Quite a bit old school campared to the other posters, we can easily notice the 3 guitar shapes reprenting the 3 guitar players :

Joe Satriani on the center with his iconic Ibanez JS line. The silhouette is however a 24 frets form, Joe uses almost exclusively 24 frets guitars for 4-5 years, hat could be the last JS2450MCB (Muscle Car Black) signature guitar or even the beautiful JS25ART.

Steve Vai on the left with the Ibanez JEM form and its monkey grip we can see through the body. The very new JEM that we presented at the NAMM 2016 were all 7 strings guitars, so it’s definitely a one that we already know.

Guthrie Govan on the right with his Charvel signature, and it gorgeous flame maple top.

The G3 2016 is kicking off in Italy in July, and they are of course more shows to come.

Tickets can be purchased starting on February 26th, 10am at www.ticketone.it

The songs played at the G3 sould be a surprise until the very first show in Roma, be sure to follow everyone on Facebook, and stayed tuned for an upcoming Aristocrats interview on Joe Satriani Universe… 😉

Saturax
My name is Robin Angelini, aka Saturax. I’m a guitar player, teacher, arranger and composer from France. Today I live in Paris, I teach guitar everywhere in France and on Skype.
Recent Posts
Comments
Follow us 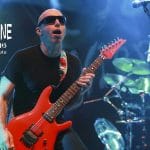