The american guitar hero Joe Satriani will celebrate his birthday on next friday 15th July, in about a month at the french Guitare En Scène festival in St-Julien-En-Genevois, festival he will endorse for its 10 years of existence. Joe Satriani Universe and Satriani-fr.com are partners of the event. A lot of famous guests like his old student and great friend Steve Vai, but also Dweezil Zappa, Carlos Santana or Johnny Gallahger will be there, and amazing surprises forthy enough to fit the 60th birthday of the greatest and most successful instrumental guitarist of all time.

Joe himself asked to come back in the french mountains, at Guitare En Scène in order to celebrate his 60 years because his last shows there back in 2011 and 2012 have been exceptional, great moments of communication including a rare intensity with his crowd, to the point he will cross the Atlantic especially to drop his flycases and offer the french people his presence. Hi usual public from the South will be there and also all the french community are invited to celebrate and give the best of themselves, but also any fan who wants to be there, with the rockstar 😉

Of course, the songs from his latest album Shockwave Supernova will be played on this single show from the Surfing to Shockwave tour 2016. The usual guys Mike Keneally, Bryan Beller and Marco Minnemann will of course be part of the event and will rock that show like they do since 2013 now. The doors open at 7:30pm on the third day of the festival, Joanne Shaw Taylor and Eric Gales will open and close the night, bringing their own rock and blues culture.

Here’s an idea of how colossal Joe was on Guitar En Scène stage and how the crowd was electric, back in 2012. Buy now your places on the festival website.

Surfing With The Alien Live at Guitare en Scène 2012

Saturax
My name is Robin Angelini, aka Saturax. I’m a guitar player, teacher, arranger and composer from France. Today I live in Paris, I teach guitar everywhere in France and on Skype.
Recent Posts
Showing 4 comments
Follow us 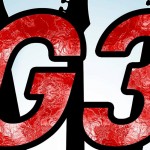 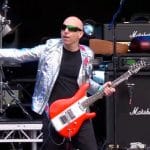 Joe Satriani live at the HellfestNews